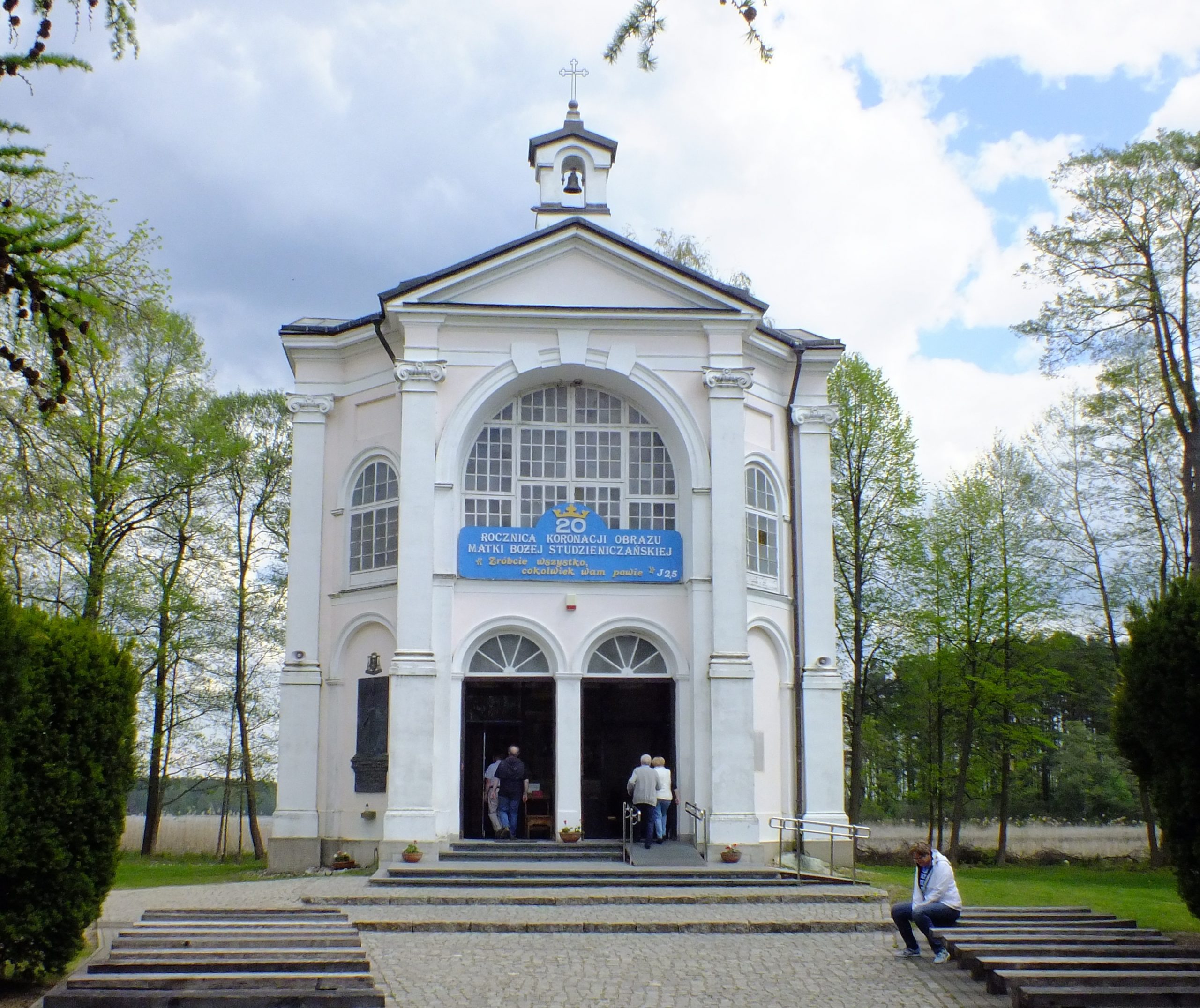 Probably everyone has heard about the Sanctuary in Studzieniczna, today a settlement in the administrative part of Augustów. At the beginning of the 18th century, on one of the islands of Lake Studzieniczna, there was a hermitage in which a monk from the Camaldolese monastery in Wigry lived. The hermitage was in the place "famous for miracles", which is reportedly testified by a visit of the Augustów deanery from 1700. Former Polish army officer Wincenty Murawski, aka Morawski, settled there. Murawski was an herbalist and apparently the water from the well he dug had healing properties, in particular it helped with eye diseases. On the island there was a copy of the image of Our Lady of Częstochowa, initially the painting hung on an oak, and later in a wooden chapel built by Murawski. In 1782, Murawski made a pilgrimage to Rome, where he obtained the right to four complete indulgences per year, with the most important one for Pentecost, next on July 26 for St. Anna, May 16 for St. Nepomuk and September 23 for St. Tekla. He also brought pictures of saints, which he placed in the chapel. Currently, there is a stone chapel there, built in 1872 by Ludwik Jeziorkowski, engineer of the Augustów Canal. The chapel's foundations are based on 64 oak piles driven into the ground. At the end of the 19th century, a dyke connecting the island with the mainland was built. The indulgence ceremonies are held in Studzieniczna to the present day, and just before the war the indulgence on Pentecost lasted three days. During the penultimate pilgrimage to Poland in 1999 Studzieniczna was visited by Pope John Paul II, there is a monument where he got off the ship to the shore.

Indulgence at Pentecost in Studzieniczna - At the well at which the figure of the Blessed Virgin Mary appeared - Through dam to the chapel - Prayers in a wooden church - Pilgrims at the foot of the chapel on an islet - Burning candles and pilgrimage on the knees - Graces of the Holy Virgin from Studzieniczna - Beggars - A friend from Warsaw - Vendors - "Cold ice water" and bagels - And when the third day of the indulgence ends ...

It was warm, May rain at night. In the morning, on the first day of Pentecost it cleared up completely. In the streams of hot sun, in a downpour of golden rays, the swarm of people of Suwałki region goes to the annual indulgence, in Studzieniczna, in the poviat Augustow. Hundreds and thousands of wagons, carts, vans and carriages are heading in the same direction - towards the miracles of the famous chapel on the island of Lake Studzieniczne. According to ancient tradition, the Mother of God was to appear at the well, and at the same time began to heal the sick and the cripples. Miracles multiplied. The news of the place, famous for miracles, spread more and more widely. More and more believers began to converge on all sides of the Suwałki-Augustów lakes, forests and villages. As the years went by, when extraordinary phenomena continued, a three-day indulgence was announced here.

Studzieniczna lies among the forests, where the Białe and Studzieniczne lakes are adjacent. From the island where the miracle happened for the first time, a dyke leading to the wooden church and the neighboring village of the same name was built. On the island itself is a white, stone chapel and a well, next to which the figure of the Mother of God was placed, in the place where she was supposed to appear on that fateful day.

Now, not only the islet, dike and area around the church, but the space of several kilometers of forest is occupied by pilgrims and their camps. The crowd of people sways and vibrates, pouring in two streams at the feet of the image of the Blessed Virgin and pouring from them.

Local people prevail. However, there is also a lot of intelligence.

Fourteen priests who came to the area cannot keep up with religious services. The crowd is squeezing more and more , although masses are celebrated without interruption. Thirsting for grace comes constantly. At times, it seems that the fence of the church graveyard will not withstand the pressure of the people and shatter soon. The smell of burning incense and the sound of silver bells flows from the crowded interiors of the temple.

The door to the islet's chapel is wide open. Those who want to experience grace or thank for the experienced grace kneel or lie prostrate at the altar.

After saying a short prayer to allow further waves of pious people access to the temple, people approach the church grandfather, who "leases" wax candles. Later, those who give thanks or are just asking for mercy in earthly pain or distress come out. According to their vows, they circle the chapel three times, being careful that the flames don't go out. Many of the pilgrims come to this wonderful place on their knees.

Dozens of men and women look weird in the scorching sun gloomy in prayers, full of fervent faith in a miracle to come true!

Apparently, the Mother of God in Studzieniczna is kind to these miserable people, because half of those present are those who have received grace.

The chapel in Studzieniczna is surrounded by lake waters everywhere. Behind the water, the dark wall of pine forests glistens in the sunny heat. Among the tall trees, the "shingle", a wooden parish temple, prays with the people.

Not only did the pious come to a wonderful place. Every free corner is full of professional beggars. There is such a multitude and variety of them that you will get confused soon. Moreover the beggars are not embarrassed and they push the image of their disability as close to the pilgrims' eyes as possible to stimulate the homies to sacrifice. There are shouts and screams in various tones, intended to increase the pity of those who do not beg ... The most terrible stumps and wounds were put on public display ... Deaf-mute stimulate the sensitivity of pilgrims by ringing the bells or clappers.

By looking at this cluster, you can immediately distinguish two species of beggars. The first is - village louts of all varieties and shades. A collection so rich that more than one ethnographer would have a lot to do here, finding types that reach back to a distant space of time. The second type is "smart". Various "cripples" with faces on which, under the mask of piety, hide eyes glistening with... insolence, their pupils fly anxiously and vigilantly. Each of these ladders has a helper, from time to time he moves closer to the "patron" and raises some of the beggar's gifts in nature, so that they do not stab too much in the eyes of further donors...

Among other things, on the dam, right by the lake, in the shadow of a trembling aspen I met an old friend. Not only I know him, but all Warsaw also knows him! He stands all autumn and winter, or rather he sits on a sheet in front of the church of St. Cross. A plaque is hung around his neck: "Deaf from birth". He draws public attention here with the same bell he uses in the capital on Krakowskie Przedmieście Street. When I recognized him and came closer to take him into the camera's viewfinder, he shook restlessly. Maybe he met me. After all, I passed by him so many times, returning from the editorial office!

The three-day indulgence in Studzieniczna has fame established by cohorts of beggars and traders. The former managed to squeeze into the cemetery fence and just near the chapel, famous for its miracles. The traders are more modest. They quickly founded improvised stalls along the main trail leading to the gate in the church fence. They sell everything! Even the ladies from the capital who went to Studzieniczna for the indulgence do not hesitate to put glass "pearls" on their neck for ... 60 grosz per meter string! Bicause: "If you fell among crows, croak like them" ... The cries of the vendors lure amateurs: "To water, to water ... Sweet, cold, ice, better than Jewish soda!" And such nectar consists of ... a bucket of cold water from the lake, a quart of "natural fruit" vinegar, half a pound of fine sugar, and other additions that come to "lemonade" from all parts of the world, in the form of flies and various other insects. You can strengthen your weakened physical condition with... excellent sausage, dried for a year and so hard thatyou can confidently use it for... thumps for threshing grain... You can bite it only with the help of pliers, a saw and a chisel ... The flower of the indulgence trade, however, are dryers. Various! And these really are excellent.

The screaming and encouragement of the stall keepers sound until late at night. And when the evening falls and the last day of the indulgence ends, it gets emptier and quieter around. The crowd disappears quickly. All that is left is the forest, the rustling of the evening prayer and the belated pilgrims who lie prostrate at the foot of the wonderful chapel and repeat the words of faith stubbornly:

"After all, you will heal me, Blessed Virgin Mary of Studzieniczna, because the goodness of our Lord, Heavenly Father, is so infinite that nothing can be denied to Mother of Jesus from Nazareth. Amen!"