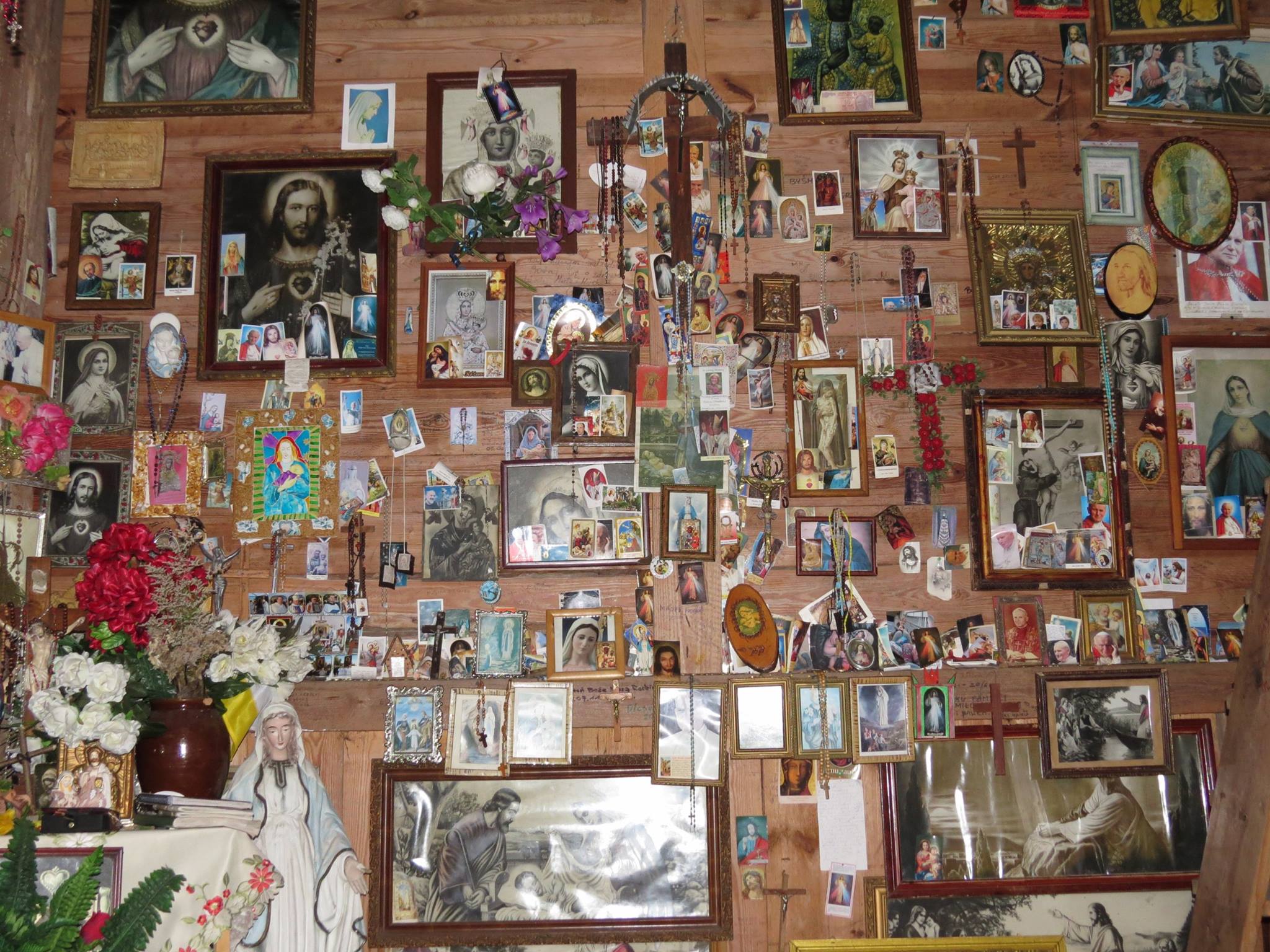 The presented article, entitled "The Holy Place in the Augustów Primeval Forest", appeared in 1932 in the "Orli Lot" magazine. It was a ethno-geographical monthly published by the Polish Society for Local Studies in Krakow for the purpose of Circles of Local Studies. from 1920 to 1950. The author of the text is Seweryn Udziela, born in 1857 and deceased in 1937, teacher, ethnographer, folklore researcher and folk expert. The Ethnographic Museum in Krakow bears his name. Illustrations of crosses and roadside shrines from the area of Augustów and Suwałki were made by Stefan Bykowski from Bydgoszcz, a collaborator of the Augustów regional magazine "Nasz Głos".

More information on this topic can be obtained, among others on the websites of the Seweryna Udziela Ethnographic Museum in Krakow, Benedictine Publishing House in Tyniec, PWN Encyclopedia, PTTK Central Library and Wikipedia.


The Holy Place in the Augustów Primeval Forest

In the spruce forest with a mix of pine trees at the mouth of the Rozpuda River to Jałowe Lake, there is the so-called "Holy Place" already in the territory of the village of Jaśki in the Raczki parish in the Suwałki poviat.

It is a group of wooden crosses and chapels placed on poles and iron crosses plugged on top of them. The most interesting is a pole carved out of one piece of stone, and showing a tree trunk 2 meters high and 4 decimeters in diameter. Imitates the pine trunk as accurately as possible; at the bottom you can see the roots coming out of the ground, the bark is forged with meticulous accuracy, on the trunk there is a hub and another mushroom with a hat; upper part is evenly cut and iron cross is stuck in it. The most important among these chapels is the one with the statue of St. John the Baptist, carved in a tree, about 6 dm high. The other one has a picture of the Mother of God set behind the glass, and the other has Jesus Crucified.

All these chapels stand close to each other in a group, you can see that they are old and they create this "Holy Place" known and worshiped by the Polish and Catholic population; in an area with a radius of several miles, it is considered a wonderful place.

Tradition maintains that the "Holy Place" is very ancient; the oldest people say that their parents have already said that it existed for a long time. Legends about its emergence are also vague and general. Everyone says that the Virgin Mary once appeared on a tree to a girl grazing a cow, so a chapel with the Virgin Mary was put on the spot. Again St. John the Baptist appeared to the shepherd boy, so another chapel is dedicated to Saint John. Then a few wooden crosses were placed there.

They were once not liked by some Moscow forester and he ordered to cut them. However, when no one dared to cut these crosses, angry he cut them off by himself and pushed them into the River Rozpuda flowing here. However, the crosses did not flow with water, but even when they were pushed further, they returned here, swimming under water. Seeing this, people saw this miracle as an indication that the crosses want to stay at the Holy Place, pulled them out of the water at night and put them again where they once stood. 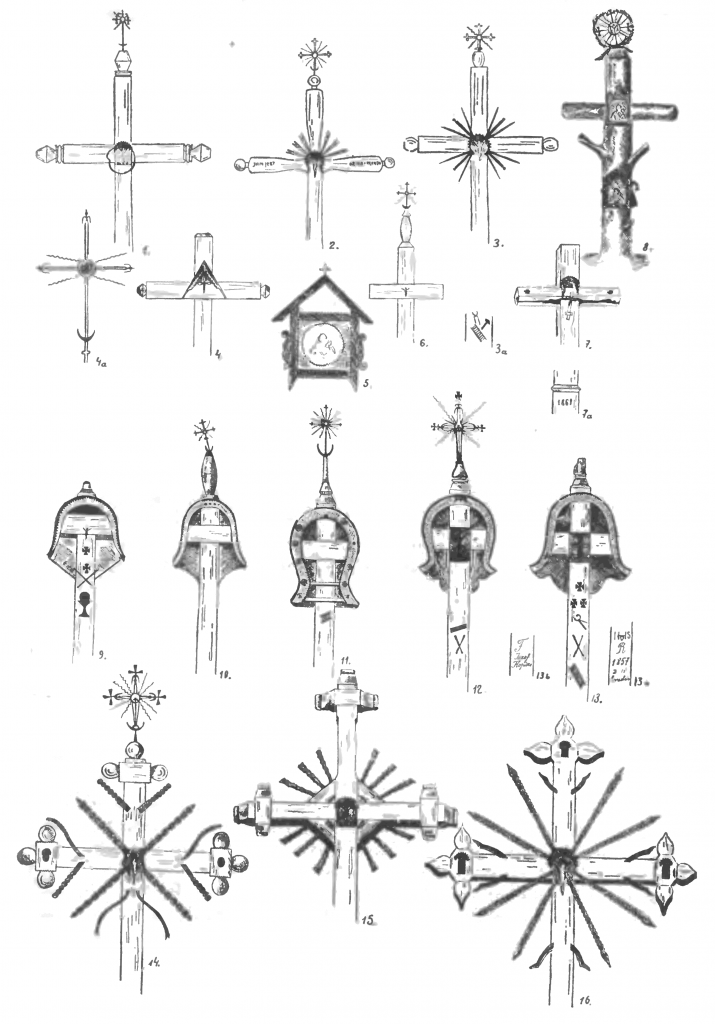 People come to this wonderful Holy Place with prayers for health, and in the stream flowing at the foot of the crosses, flowing from the neighboring Jałowe Lake to Rozpuda River, sick children are washed, leaving their T-shirts and handkerchiefs with which they tie the crosses.

Also older patients go to the care of the Mother of God and Saint John and make pilgrimages to this place. They wash themselves with water, dip in handkerchiefs and cover sick areas. Such wraps are effective when a rash covers the body, when ulcers form, sores, when the head hurts. I saw a mother leading a lame girl into the water, maybe nine years old with one crutch.

On a day of St. John the Baptist, June 24, there is a kind of church fair, I say kind of, because there is no church in the place, there is not even a chapel in which there would be even a small altar, used to celebrate mass. Priests also do not take part in any folk festival. Only a vicar from Raczki has been sending a church servant with a iron can to collect contributions from some time. He stands under the statue of St. John, puts the can in an accessible and visible place, and next to it - a church crucifix.

People from all around come on foot and arrive in carts. All cars full of older and smaller children and babies, because today is a children's festival; after all, the Virgin Mary and Saint John appeared to the children.

The church fair is crowded, there are several thousand people there. They leave the carts in the woods, and the path leading through the woods to the Holy Place is crammed with stallholders on both sides. In the stalls I saw the most candy, some cakes; there are stalls with rolls, puppets, and sausages; there were only two stalls with devotions, beer, soda water and ice cream in others; a couple of stalls with children's toys, but these were factory products, not local folk products.

A bunch of beggars wailed songs about the Mother of God and Saint John and asked for alms.

Everyone who came knelt in front of the shrines, prayed and tossed a penny to the can. Who was sick he went to the water. The priests do not want to take care of the Holy Place and organize this folk fair and sanctify it somehow. Yes, it is really a folk festival.

This day is also a pastoral holiday.

When rushing the cattle home from the morning feed, each shepherd dresses them with field flowers, hanging wreaths made of them on the horns and on the neck of each cattle. Today each shepherd also receives from the landlady in the gift 50 groszy for each cattle grazed. 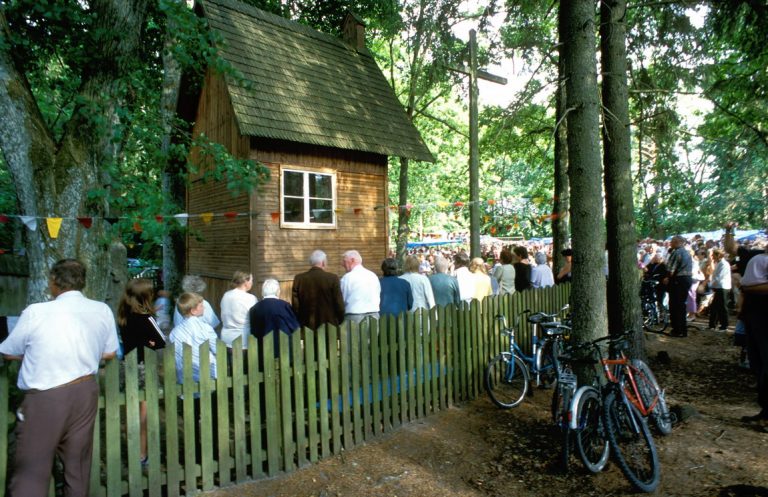