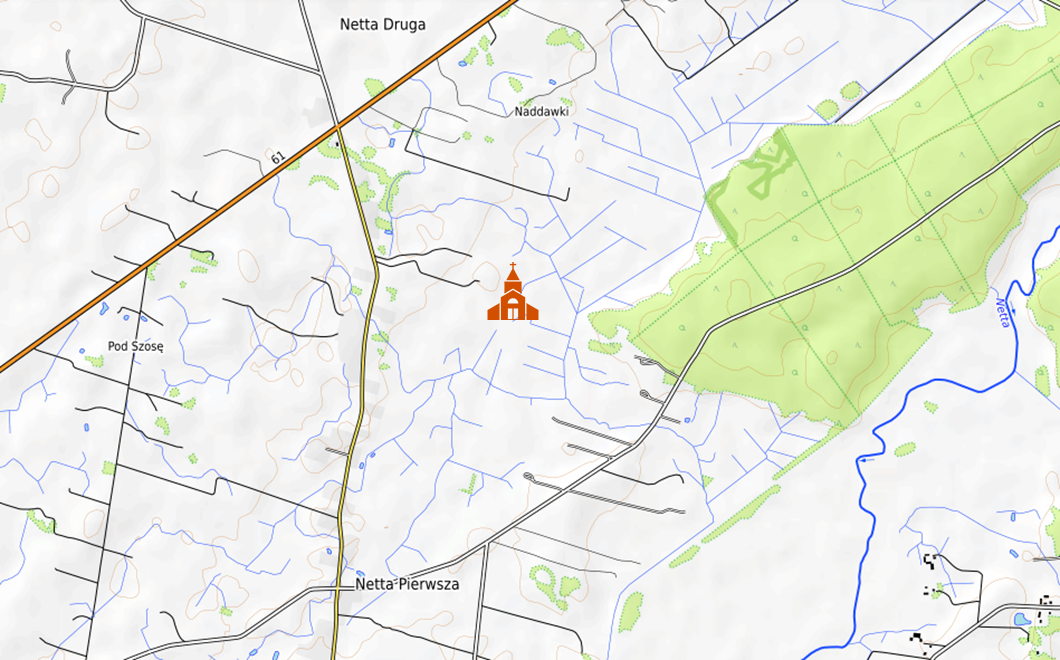 Both the beginning and the end of the calendar year make us reflect on life and the passing of our existence on earth. However, we do not often reflect on the fact that the space around us is changing as well. This also applies to architecture, including sacral one. For centuries, in the Bargłów parish, there hasn't been a St. Margaret's Church in Netta (now Netta Pierwsza).

Józef Golubiewski, an insightful chronicler of Bargłów, in the Chronicle of the royal parish of Bargłów notes out of some documents three pieces of information about the existence of a church in Netta. The first one is taken from a letter from King Zygmunt August of 1561, the second one from 1700 and the third one from the church inventory written down in 1783. Traces of the existence of the church in Netta have been preserved in very few documents and publications, and in the memory of some villagers.

In his work "The History of Settlement in Augustów County from the 15th to the end of the 18th century", a historian Jerzy Wiśniewski gives the local name of the hill "Kościółek" (little church) and supposes that a branch church of the Bargłów Temple could have stood on it. While I was looking for traces of this place in September 2006, most of the people I asked, had not heard about the existence of a church in Netta. Someone anonymous directed me to the Augustów Canal, where I met Tadeusz Połubiński who pointed me exactly to the hill where the church stood and shared his information with me.

While working on the sacral monuments of Bargłów Kościelny, I got acquainted with the parish documentaries copied by Józef Golubiewski. These included, among others, a copy of a letter from King Zygmunt August dated December 1561 to a Bargłów Pastor Tomasz Bohdan Szaciła (in the List of the Parish Priests and Administrators of the Bargłów parish, Józef Golubiewski mentions him as the first parson in Bargłów). In this letter, the ruler assigned Pastor Szaciła a church in Netta with the land in the amount of three voloks, three morgens and two square rods. It appears from the letter that this church, called in the document kościołek (a small church), was built by Jan Radziwill. The letter was written at the request of the vicar. It was supposed to provide the rectory with these lands as its own for eternal times. I' m quoting their location from the copy: w Wołosty naszoy Korolewskoy w obrubie wsi Netty [..] lezaszczyie w koncu wolok naszych koncom –do Rzeki Netty a bokom podle wolok Nettowskich (Our royal voloks are around the Netta village […] lie at the ends of our voloks, ends – to the Netta river and sides towards Netta’s voloks). The parish priest's only duty was to hold a service in the church every day: kromie tolko Nabożeństwa każdo dziennocho tak on sam, jako i następcy Pilnie powinni czyniti (besides this, he, as well as his successors, should diligently hold a mass every day). The year of construction of the church is unknown. Netta, formerly known as Meta, was founded around 1532 by a Mazovian, Maciej Srebrowski from Srebrov near Wizna with the authorization of Jan Radziwill, a Lithuanian cupbearer. Most probably, the private church of the Radziwiłłs was established after the founding of the Meta, and before the incorporation of the area into the royal estate and before the establishment of the parish in Bargłów in 1544. Previously, these areas belonged to the parish in Rajgród. Whether it was originally a branch church of the Parish of Rajgród is not entirely known. Józef Golubiewski in the chronicle calls it prywatny kościółek (a private little church). Later documents show that it was erected as the church of St. Margaret.

The Swedish war wreaked great havoc on the lands of the parish of Bargłów. The following churches were completely destroyed: the parish church in Bargłów and the private church in Grabów parish. The church in Netta survived the war turmoil and in 1700 was listed as the only church in the area. A historian Jerzy Wiśniewski mentions that: The branch church of St. Margaret in Netta was in a better condition. However, it is likely that the war undermined its later glory and contributed to its downfall. During the Swedish Deluge, the village of Netta was severely damaged and people were impoverished. A historian Jarosław Szlaszyński, on the basis of materials from the State Lithuanian Archive in Vilnius, reports that Netta has been completely destroyed by fire with only four empty cottages left.

The description of the church can be found in a document issued on the occasion of the general dean's visitation of the parish of Bargłów in March 1783. It was situated half a mile from the Bargłowski church. It stood on an uphill stretch near the forest, 30 furlongs away from the village of Neta. It was described as ravaged, unrepairable and, as a result, unfit for service. It was made of wood. It had two doors and five windows. One double door, on iron hinges with the inner lock from the cemetery, the other one to the sacristy also on iron hinges with two hasps and a lock (z dwoma Proboiami y Skoblem). The windows were lead-framed. Four of them were in the church and one in the sacristy. The floor in the church was made of lumber. The church was equipped with a pulpit, two benches and an altar with a painting of St. Margaret. Above the church porch, there was a dome with a bell, topped with an iron cross. The Church, as the surveyor Father Szymon Pienczykowski writes, w cało spustoszony, tak w Dachu, Scianach iako y we Wnętrzney Ozdobie (is completely ravaged, equally in the Roof, the Walls and the Interiors). The floor in it was rotten while the windows were broken and the equipment was decayed. It was not suitable for holding masses, yet they were still held there. According to the old custom, it was used for four masses a year: on St. Margaret´s Day, the second day of Christmas, the second day of Easter and the second day of Green Week. The parish's description states that according to tradition, the church was erected under the new name of St. Margaret's. Near the church there was a cemetery, described on the occasion of a visitation: a graveyard that was once fenced.

The land belonging to the church was cultivated by the Bargłowski presbytery. The church documents from 1822 and 1832 state that the voloks in the village of Netta were handed out by the predecessors by private agreement to the landowners who lived in their own houses. The names of those living in their own cottages were also given. In 1822 these were: Maciej Dudek, Jan Drozd, Tomasz Romanowski, Piotr Szymański and Jan Gulan. Ten years later, the following names: Jan Drozd, Kalisz (without a name), Antoni Gulan, Andrzej Kościuch and Mateusz Karp were mentioned.

What happened to the church?

In the protocol of the General Visitation of 1822, signed by Pastor Jan Kanty Zawadzki and the Dean of the parish of Wąsów, Father Modzelewski, it was written that there were no public chapels in the parish. The church from Netta was also not mentioned in it. One can think that at that time the church of St. Margaret in Netta did not exist anymore. It was probably disassembled and the remains were, following tradition, burnt just as it was done with rotten crosses.

Irena Baturowa in her article about Netta-Folwark published in "Jaćwieża" also mentions a hill in Netta Pierwsza where the church of St. Margaret once stood. She reports that there was a spring at the foot of the hill whose water cured eye diseases. According to the legend she quoted, one time a rich lady washed her blind dog's eyes with the water from the spring and the water lost its healing powers.

My local guide to Kościółek (the Church Hill) told me that he remembered from the stories of his ancestors that in the 19th and early 20th century a wooden cross stood on the hill. Until recently, bones had been ploughed out of the hillside confirming the existence of a cemetery there in the past.

I believe that it is worth keeping in mind the existence of the church in Netta. We need to continue looking for more information and, thus, answers to numerous questions related to it. For instance, who canonically erected this church and why St. Margaret was chosen as its patroness?