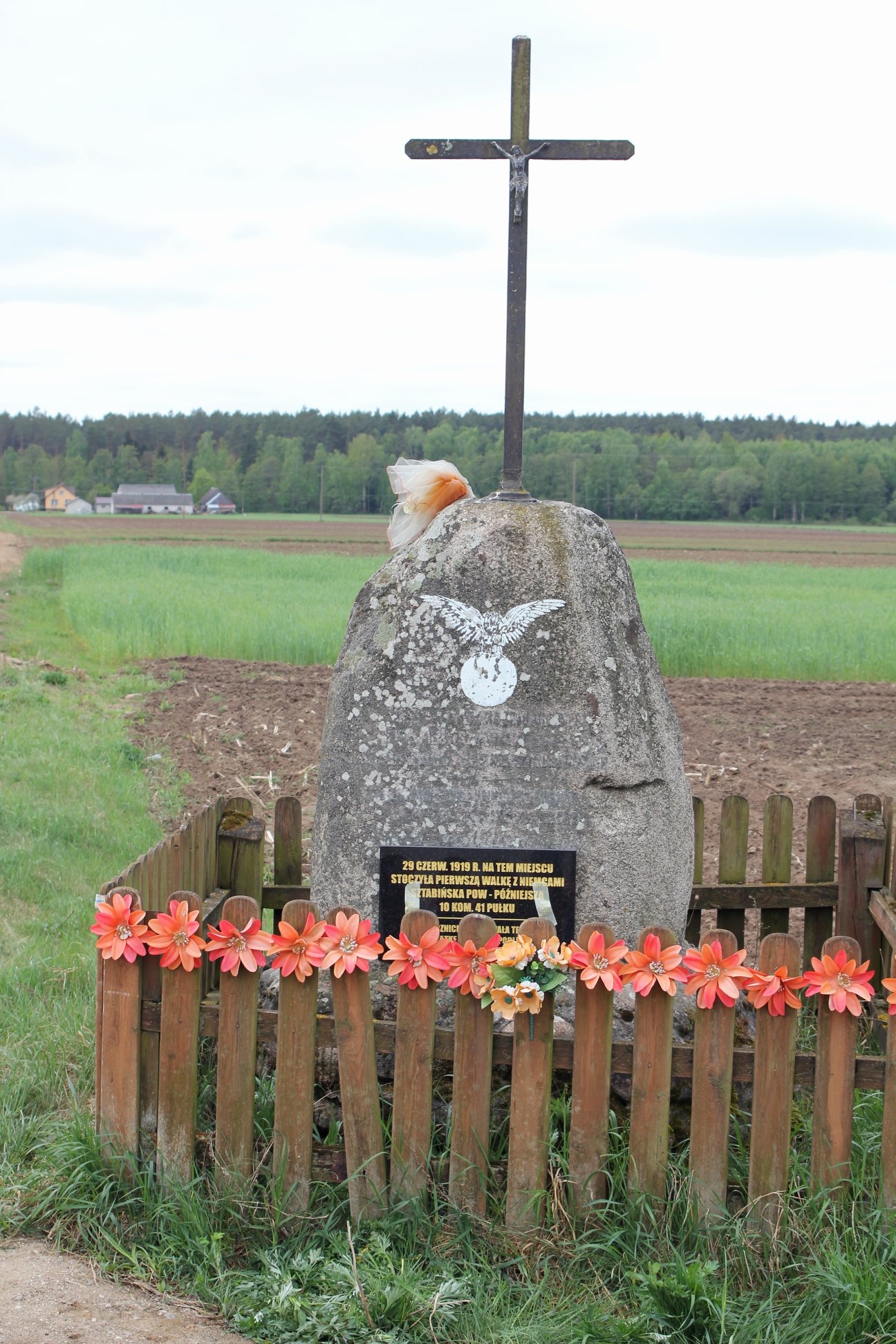 June 1919 was another month of German terror in the Suwałki, Sejny and Augustów poviats. Although since November 11, 1918 the world healed the wounds after the Great War, and Poland, independent after 123 years of captivity, created its statehood in pain, our areas still remained under German and partly Lithuanian occupation.

In November 1918, the Polish Military Organization (POW) operating in these areas made an attempt to liberate it from German occupation, but the Germans quickly began retaliation and few of the POW members had to go underground. At the beginning of 1919, the Germans brought the von Diebitsch Volunteer Corps to this area. The Germans used the protracted occupation for plunder and openly supported the claims of Lithuanians to the Suwałki region. At a peace conference in Paris on March 24, 1919, the Lithuanian government submitted claims to the entire Suwałki Governorate, including Augustów. In April 1919, German troops manned the demarcation line at major points. Their posts were located in Barszcze, near Tajno, Augustów, Sztabin, Sosnowo and Dębowo. In connection with the situation, reconstruction of the structures of the Polish Military Organization was undertaken. Augustów District of POW was divided into two sub-regions, north and south. Recruitment point of POW volunteers was located in Rajgród in free Poland.

18 June The Allied Council of Four, composed of the leaders of four of the victorious allies, i.e. Great Britain, the United States, France and Italy, at a peace conference in Paris marked a demarcation line from Rutki, through Turówka, Lake Necko and the Augustów Canal, dividing the Augustów and Augustów Poviats , allocating the eastern part to Lithuania. This was met with a firm response from the Polish Government. More POW activities were also a response to this fact. On June 25 branches of the Polish Military Organization defeated the Germans in the villages of Reszki and Pomiany, and on June 29, the units of the "Sztabin" and "Jaminy" Commands, under the leadership of Michał Łazarski, fought the battle of Czarniewo. The German unit that carried out the requisition there was completely destroyed. As a result of this skirmish, the Germans stepped down from Sztabin, moving to the Gabowe Grądy - Kolnica - Sajenek line, basing their defense in Augustów. On July 8, the Germans were forced to retreat to Prussia at the Battle of Tajno. This is how this fight was described in Gazeta Zbrojna from July 1929: "A very beautiful action was also the escapade by O. L. No. 2 to Czarniewo - a village on the Biebrza river. Michał Łazarski led his unit through unknown paths among the swamps at Polkowo-Mogilnice and at dawn, thanks to complete surprise, he crushed and drowned the German company, which rested there after the requisitions. After severe failures during this period, the Germans agreed to negotiate with us."

A list of signatures submitted by the inhabitants of these areas on a petition for leaving the Suwałki and Augustów regions within Poland, as well as the firm speech of the Augustów MP, Fr. Stanisław Szczęsnowicz, meant that the steps taken by the Polish government led to the creation of a new border line. The poviats of Augustów, Suwałki and the western part of Sejny were within Polish borders, on July 25 the Germans left Augustów, and the next day the Polish army entered.

Almost the entire command of POW "Sztabin" and "Jaminy" voluntarily joined the 41st Suwałki Infantry Regiment. The 10th Company was created from them. Everyone took part in the Polish-Bolshevik war of 1920. Several of the 10 companies of the 41st regiment were killed in defense of their homeland. To commemorate the 15th anniversary of Poland regaining independence, exactly on the 14th anniversary of the battle, on June 29, 1933, a commemorative obelisk was unveiled in Czarniewo, a boulder crowned with an iron cross, painted with stylized eagle breaking the shackles and an inscription that was a secret for 80 years. The ceremony gathered local people, veterans of those fights, authorities of the municipalities of Dębowo and Sztabin, representatives of the army and the poviat. The obelisk remained intact until October 1939. On September 17 this year, Soviet troops entered Eastern Poland without declaring war. In fear of repression, the people of Czarniewo decided to forge an inscription on stone. It was probably done by Stanisław Budkiewicz, a resident of this village, a member of the POW, a veteran of the Polish-Bolshevik war. There was no engraved list of names, but the company number and military unit were given. The fear was justified, checking the personal status of the 10th company of the 41st Suwałki Infantry Regiment, would not pose any difficulties for the Soviets, it was a ready list of people to be repressed. For 80 years, the memory of the inscription on the monument has faded, the witnesses of those days have long since gone. We tried to read the inscription a few years ago, unfortunately with poor results. Only with the help of chalk and dozens of photos of individual parts of the monument, enlarged then on the screen, it was possible to completely recreate the historical inscription. Certainly, the inspiration to read the mysterious inscription was the fact that the obelisk from Czarniewo is one of the points of the created historical and natural trail in the area of ​​the Jaminy parish.

Here is the content of this inscription: "29 JUN. 1919 ON THIS PLACE, THE FIRST FIGHT WITH GERMANS WAS WON BY SZTABIN POW - LATER 10 COMP. 41 REGIMENT.

ON THE 15TH ANNIVERSARY, THIS CROSS WAS FOUDED TO COMMEMORATE THE FIGHT FOR INDEPENDENCE. 29 JUNE 1933".

There is already a new plaque on the obelisk with the reconstructed inscription. Funded by Mr. Mariusz Modzelewski, who runs the Modzelewski Stonemason's Factory in Sztabin. The inscription was read by: Tomasz Chilicki from the Association of Local Initiatives "Biebrza" in Jaminy and Ryszard Korąkiewicz from the Jaminy Indexing Team Association. A piece of our history has been saved.