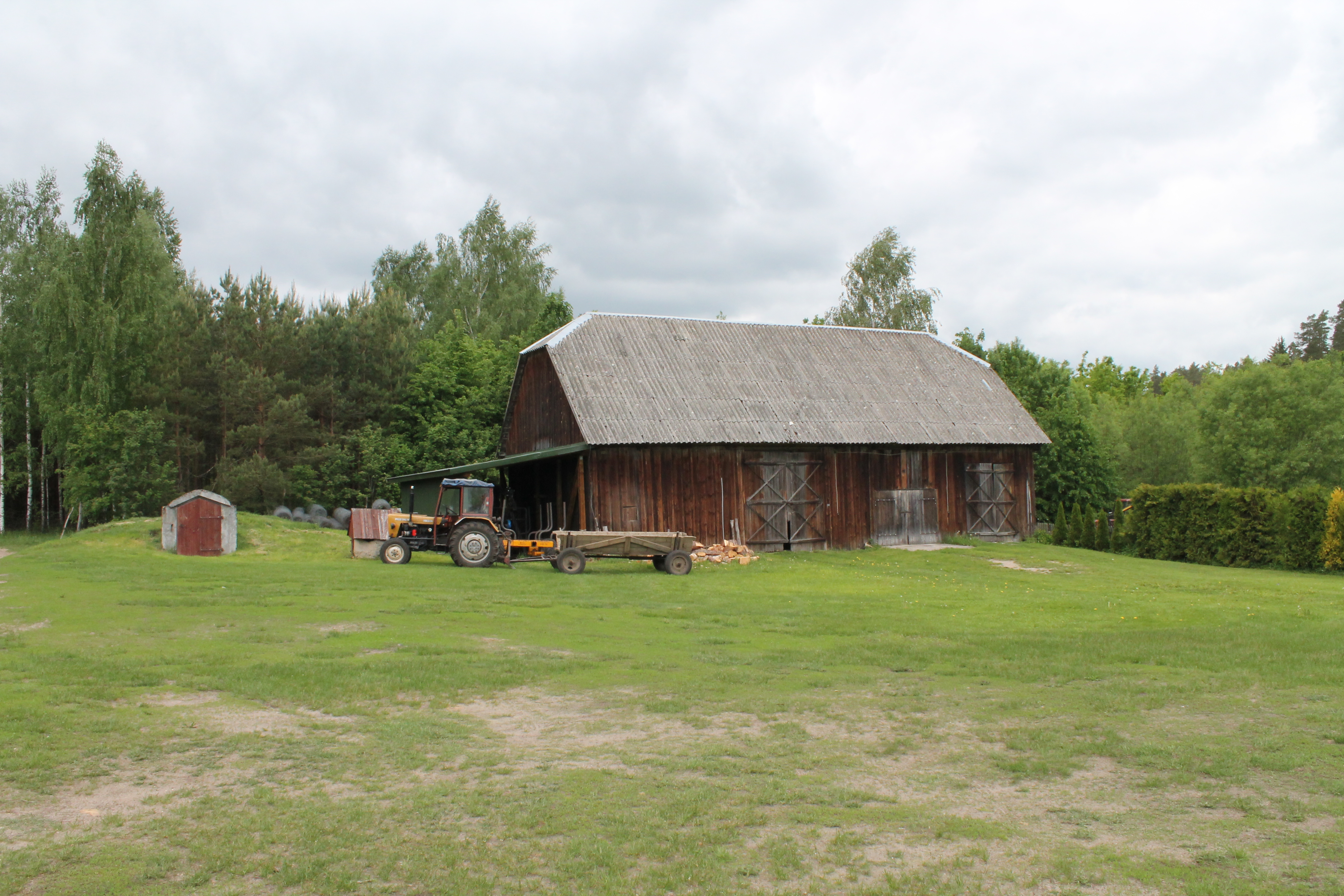 The Łubianka forest settlement located 1.5 km northwest of the village of Jaminy appears for the first time in the record books of the Roman Catholic parish in Jaminy in 1810. Over the years, the name of the settlement has evolved, recorded in various ways:

The "Geographical Dictionary of the Kingdom of Poland and Other Slavic Countries" published in Warsaw in 1880-1902 mentions the settlement of Łubiane aka Łubiańce in the Augustów poviat, in the municipality of Dębowo, in the Jaminy parish. At that time, there was 1 house in the settlement, and the settlement was inhabited by 9 people. 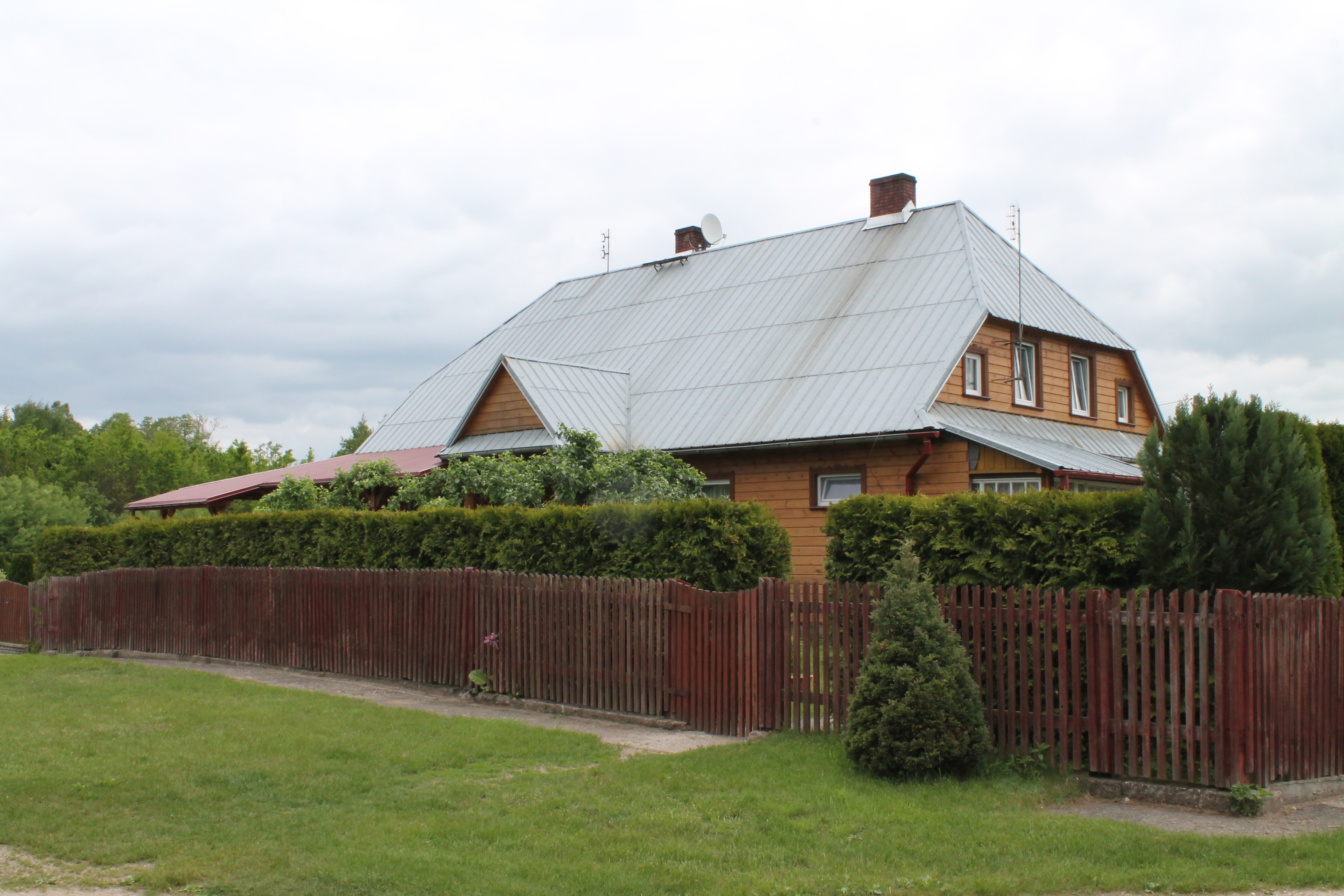 This article aims to describe the people who lived in Lubianka and were recorded in the record books of the Jaminy parish from the beginning of the 19th century until the outbreak of World War II in 1939.

The oldest families recorded in Łubianka in the record books were Witkowski. The surname Witkowski was also spelled as Wićko.

Their daughter Rozalia was born in Wrotki in 1808.

Only one entry for this family can be found in the Jamian books. In 1812 the son Jan was born. The godparents were Michał Witkowski and Franciszka Piktelanka. Father Michał was written as honest, which at that time meant a farmer or a rural craftsman.

In 1814 Jan Stożyński, an honest from Jaminy and Konstancja Piktel, an honest from Łubianka, got married in the Jaminy church. The further history of this family was associated with the village of Jaminy, where the spouses lived. In the same year, their son Ludwik was born. There is no mention of other children of Jan and Konstancja. In 1838 Ludwik Stożyński married Ludwika Chilicka from Sztabin. After the death of his wife, in 1854 he remarried with Katarzyna Gruszewicz from Jaminy.

In 1815 Jan Witkowski, a widower from Łubianka (probably after the deceased Franciszka née Piktel) and Marianna Kozakiewicz, a sible from Jaminy, got married in the Jaminy church. In the same year, their son Paweł was born in Łubianka. The next children are Marianna (born in 1818), Wojciech (born in 1820) and Antoni (born in 1821), who in 1841 married Anna Panasewicz from Jaminy. The next children of Jan Witkowski and Marianna née Kozakiewicz were already born in Jaminy: in 1824 Agnieszka and in 1826 Katarzyna. Jan died in Jaminy in 1849, recorded in his death certificate as Jan Wićko.

The Zagrodzki family appeared in the books of the Jaminy parish twice, on the occasion of the birth of children. In 1821 Tekla was born in Łubianka, whose godparents were nobles Ignacy Chodorowski and Wiktoria Krajewska. A year later, Ignacy Zagrodzki was born. His godparents were also nobles: Ludwik Piotrowski and Anna Chodorowska.

Once in the books of the Jaminy parish, Marianna Leszczyńska, single, was registered, who in 1824 in Łubianka gave birth to an illegitimate child named Ludwik. The godparents were noble Andrzej Teresewicz and Helena Stożyńska. In 1830 Rozalia, 3-year-old daughter of Marianna Leszczyńska, single from Jaziewo, died, but it is not certain whether the record applies to the same Marianna, who had lived in Łubianka six years earlier.

Only one entry regarding this family has survived in the Jaminy books. In 1826, forester (podleśny) Felicjan Białkowski died at the age of 36, leaving his wife Konstancja née Tarasiewicz.

The maiden name of Dorota, who was a maid in the Łubiane sacred spot, is unknown. The family appeared on the pages of the Jaminy books only once. In 1833 Paweł Rogalski, son of deceased Paweł Rogalski and Dorota, died at the age of 6.

Rozalia Totoraj, a single woman, appeared on the pages of the Jaminy record books only once. In 1847 she gave birth to her daughter Elżbieta in Łubianka. Rozalia worked as a maid in Łubianka. This time the baby godparents were not nobles, as in the case of the aforementioned maidens, but Jan Witkowski - a farmer from Jaminy and Antoni Mordas - a cornerer (kątnik) from Jaminy.

In 1846, 30-year-old Kazimierz Książkowski, residing in Jaminy, born in Kojle village in Wiżajny parish, son of Jan and Konstancja née Kilert and 19-year-old Karolina Dobrzańska, living in Dębowo, and born in Augustów, daughter of Józef Dobrzański and Marianna, guardians of the lock in Dębowo, were married in the Jaminy church. Kazimierz Książkowski held the position of shooter of The Government Forests of the Guard Łubiana. He changed jobs quite often. In 1843, holding the position of the shooter of The Government Forests in Klonowo, he became the godfather of Franciszka Pusdeszrys. In 1847 Józefata Pelagia Książkowska was born in Wrotki. The only child of Kazimierz and Karolina born in Łubianka was Anna (1849). The next children - Leonard Walenty (1851) and Feliks (1854) were born in Ostrzełek, where Kazimierz was transferred to.

The family of Maciej and Katarzyna appeared in the Jaminy books many times. Katarzyna's maiden name is not certain, it was also sometimes written as Załkowska, Złotkowska and Hotkowska. The family did not live in Łubianka, but in Jaziewo. Their son Kazimierz died in Łubianka in 1853. Other records about this family were registered in Jaziewo. The wedding between Maciej Juchniewicz from Jaziewo and Katarzyna (written as Złotkowska) took place in 1819. In 1821, their daughter Marianna was born, who had to die soon after birth. In 1824, Antonina Juchniewicz was born in Jaziewo. She died in 1900 in Jaziewo, written as Antonina Roszko after her husband. In 1838 son Kazimierz Józef was born, the same who died later in Łubianka. In the same 1838, 3-year-old Marianna Juchniewicz died. Her birth certificate was not found in the Jaminy books. Another child was Józefata, born in 1841. Józefata died as a widow (registered as Józefa Calewska) in 1916 in Jaziewo. Maciej Juchniewicz died as a widower in Jaziewo in 1866.

In 1855 Jan Prejss, a forester (podleśny) of The Government Forests from Łubianka, died, and this is the only trace of this family in the Jaminy books.

Literally for a moment, a forester (podleśny) of The Government Forests Roman Klichowski with his wife Józefa Jętarska from Łubianka settlement appeared in the birth and death certificates from the Jaminy parish. In 1861 their daughter Domicella Kajetana was born in Łubianka, who died the same year.

Another single in Łubianka who appeared on the pages of the Jaminy books was a maid born in Jastrzębna. In 1862 she gave birth to an illegitimate daughter Michalina.

The Mrozowski family appeared on the pages of Jaminy record books for a while in connection with the role of the forester (podleśny) of The Government Forests in the Guard of Łubiana by Jan Mrozowski. In 1868, his son Stanisław was born in Łubianka. The same year, just over two weeks later, Bogusława Mrozowska née Kowalewska died (recorded in the death certificate as Bogumiła), perhaps as a result of postpartum complications. She was the daughter of Antoni Kowalewski, director of the Horoszno chamber and Eleonora née Cybulski.

A family that appeared only once on the pages of the Jaminy books on the occasion of the marriage of their daughter Maria Wąsowska. In 1872 she married Jan Andradzki from Dębowo, son of Stanisław Andradzki and Aniela née Głowacka. Antoni was at the time a forest ranger in Łubianka, although Maria was born in Potwiszki, in the Skrawdzie parish.

Teofila Prużańska, a single peasant woman working as a laborer, appeared in the Jaminy books only once. In 1873 she gave birth to her son, Stanisław, in Łubianka.

In 1888 in Jaminy there was a marriage between Jan Owsiejko, a native of Laudańszczyzna in the Suchowola parish, son of Mateusz Owsiejko and Anna née Piotrowski, who at that time worked as a laborer in Łubianka, with Marianna Andraka from Mogilnice. After the wedding, the life of the young couple was associated with Mogilnice. In 1888 their daughter Rozalia was born, in 1894 Wincenty, in 1897 Melania, who died three years later, in 1903 Ignacy was born. In 1900, Stanisław's 9-year-old daughter died in Mogilnice. Marianna Owsiejko née Andraka died in 1911. Later that year Jan Owsiejko married Franciszka Szyc from Jaminy. He became a widower for the second time in 1921, and died in 1922.

In 1894 in Łubianka an unmarried peasant laborer, Ewa Wyszyńska, gave birth to her daughter Władysława. In 1924 in Jaminy Władysława Wyszyńska married Józef Kucharski from Dolistowo, born in Jatwieź Wielka. Perhaps the same Ewa Wyszyńska, a single from Jaminy, born in Uścianki, married in 1898 Ludwik Kozakiewicz, a widower from Jaminy. Ludwik Kozakiewicz died in Jaminy in 1911, and Ewa married Ludwik Czmielewski from Czarniewo in 1923.

In 1900 in Jaminy Michał Toczko, son of Ludwik and Ewa née Mitruk, born in Zwierzyniec Wielki, and living in Łubianka married with Joanna Dobrowolska from Wrotki. After the wedding, the family's life went on in Wrotki. In 1901 Albin was born, in 1903 a daughter Bronisława (she died in the same year), a year later Aleksandra (died after birth), in 1905 Melania, in 1907 Hieronim (died in 1922), and in 1910 Władysława (she died in the same year). It seems that out of all the children of Michał and Joanna only Albin Toczko lived to adulthood, who in 1928 married Józefa Polkowska from Polkowo and Melania Toczko, who in 1931 married Julian Prawdzik. In 1904 Michał's father, Ludwik, died in Wrotki, and Michał himself died in 1941.

In 1921 in Łubianka a forester of The Augustów Government Forests, 68-year-old Aleksander Rybacki died, a native of Garwolin, son of Jan and Karolina née Dulska, leaving his wife Bronisława née Nowicka.

In 1927 Malwina Witkowska died in Łubianka, where she temporarily lived, wife of Leonard - a state railways clerk, daughter of Adam Wierzykowski and Maria Felber, coming from Brigidów estate in the Rzeczyce poviat, the Nowogródek province.

In 1932, Miss Julia Anna Duczyńska, 63-years-old, daughter of Wincenty and Krystyna née Krasicki, a native of Warsaw, died in Łubianka.

Thanks to the kindness of Urszula Zalewska, Jerzy Kozłowski and Małgorzata Piekarska I can add a piece of the further history of Łubianka.

In the 1960s, Łubianka was the seat of the Sztabin National Forest Inspectorate. The forest inspector was Stanisław Bołtuć (born in 1905); The forester was Edward Kozłowski, and his wife, Maria Kozłowska née Rzepnicka - was the chief accountant; cashier - Mr. Krysztopa (from Dębowo or Jasionowo); accountant - Halina Lotkowska from Sztabin (she got married to Henryk Wielgat from Sztabin, she commuted to work in Sztabin by scooter Osa); Krystyna Koniecko (later Kapusta) also worked there.

In the memories of Jerzy Kozłowski, the wife of the forester Czesław Bołtuć went to feed pigs every morning, singing "When morning auroras get up..." 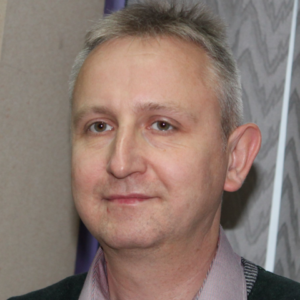